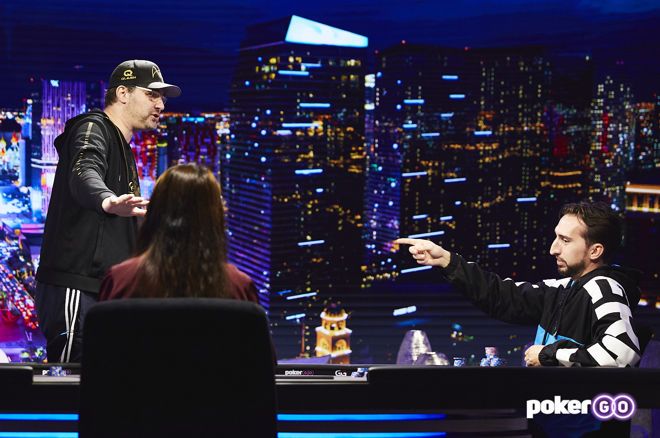 Two weeks ago on “Poker After Dark”, it was the first part of the $10,000 buy-in “Fight Night” sit-n-go style format game, which started players with 125,000 in chips. Among those in action were sports personality Nick Wright, Maria Ho, Daniel Negreanu, Phil Hellmuth, and Jon Aguiar. They were also joined by UFC ring announcer Bruce Buffer and daily fantasy sports legend Peter Jennings.

Last week’s episode marked Part 2 as seven were cut down to the final three, which was the money bubble as only the top two would get paid – the winner was set to take home $50,000 and the runner-up $20,000.

Here’s a look at some of the most interesting hands from this week’s episode:

Jennings Gets It in Against Wright 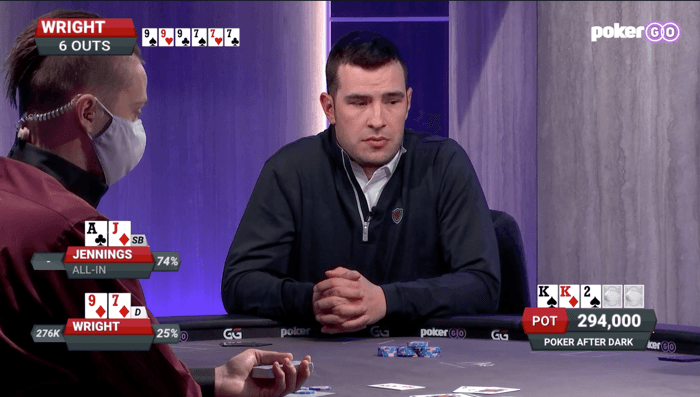 In one of the first hands, Wright raised the button to 45,000 with the

only to have Jennings three-bet jam for 132,000 from the small blind holding the

Jennings got it in good but Wright held two live cards. The

flop wasn’t anything special, and neither was the

Jennings just needed to dodge either a nine or seven on the river, which he successfully did when the

bricked. Ship the double to Jennings! 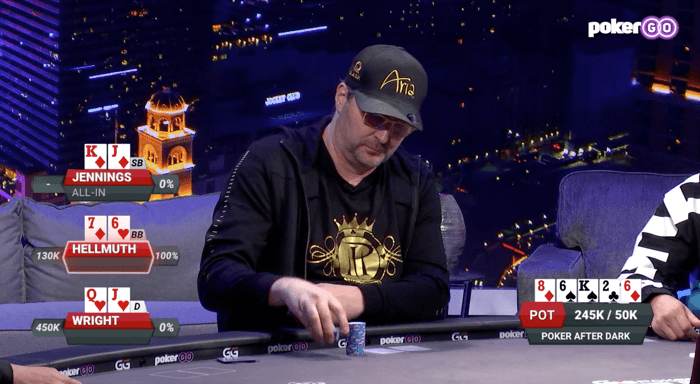 and Jennings moved all in from the small blind for 75,000 with the

. Hellmuth was in the big and called with the

and with no option to raise, Wright called as well to see a

Jennings paired his king as was a big favorite, and he stayed in front on the

turn after the two active players checked the flop. On the turn, Hellmuth bet 25,000 and Wright called to see the river, which was the

Hellmuth bet 45,000, Wright folded, and Jennings discovered the bad news – that he finished as the bubble boy.

Hellmuth Has the Wright Stuff 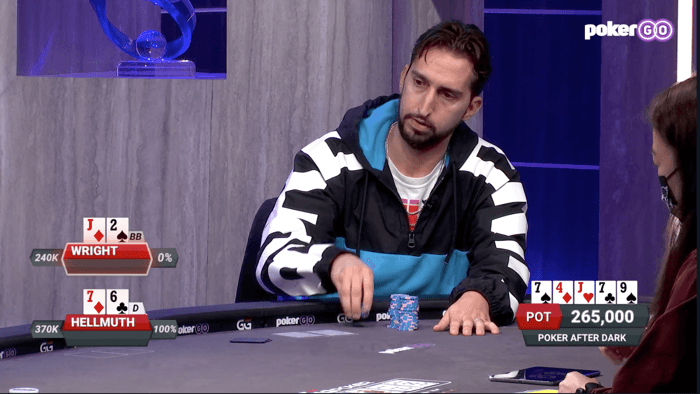 Hellmuth limped the button for 10,000 with the

and Wright checked his option holding the

to bring about a flop of

Wright checked top pair and then called when Hellmuth, who flopped middle pair, bet 40,000. The

turn was gin for Hellmuth and he bet 55,000 after Wright checked for a second time. Wright quickly called and the

completed the board on the river.

Wright Flops the Joint; Hellmuth on the Ropes 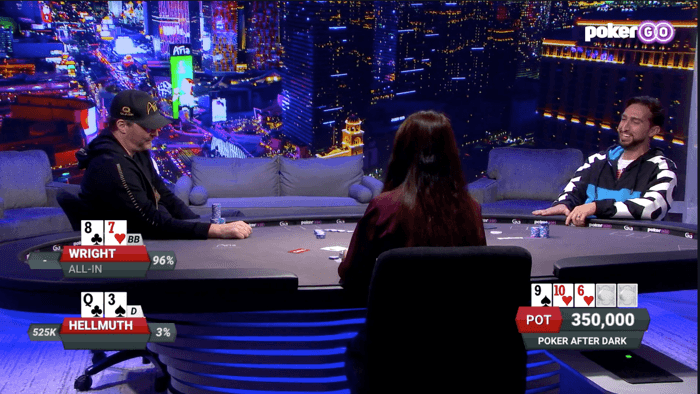 Hellmuth looked down at the

on the button and moved all in to put the pressure on Wright, who paused for a bit before calling off for 160,000 with the

Hellmuth was actually ahead and a slight 54% favorite, but the

flop left him with just a 3% runner-runner chance of winning after Wright flopped the stone-cold nuts.

turn bumped Hellmuth to a 9% chance as a jack would give him a bigger straight, but the

In the very next hand shown, Hellmuth moved all in with the

from the button and Wright called off with the 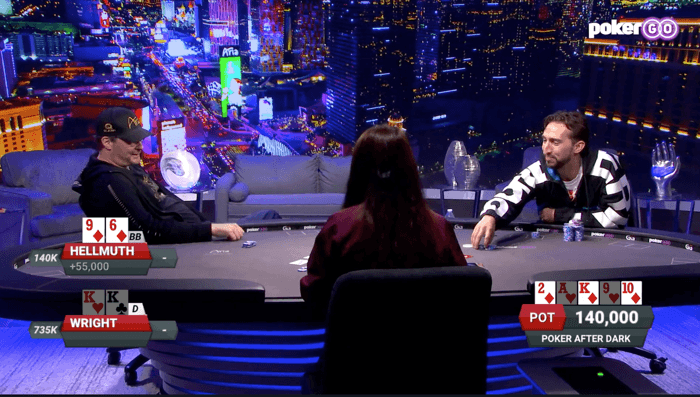 Not long after, Hellmuth got his short stack in with the

only to have Wright roll over the

flop made things spicy as Wright flopped a set but Hellmuth a diamond flush draw. The

turn was no help to the “Poker Brat,” but the

“I wasn’t expecting that one,” Hellmuth said.

Soon thereafter, Hellmuth got it in again, this time with the

only to see Wright turn over the

. Wright was close to winning it again, but the

flop snatched it away by pairing Hellmuth. Neither the 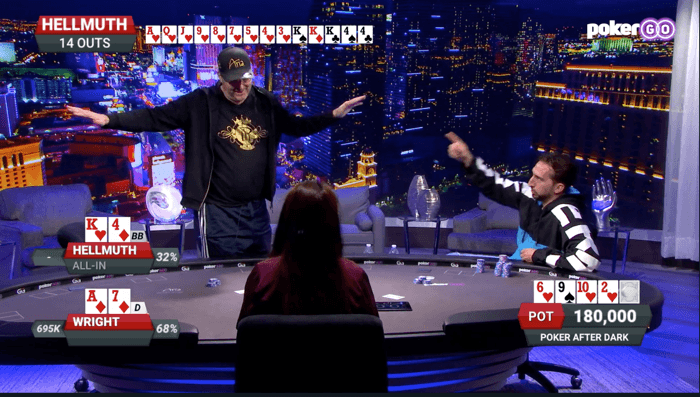 Despite those wins, Hellmuth began to slide before the final hand of the SnG took place. It happened when Hellmuth had 40,000 in the middle and just 30,000 behind. Wright moved all in holding the

and Hellmuth had little choice but to call off with the

flop was nothing too exciting, but the

turn was as Hellmuth picked up a heart draw and had a 32% chance of staying alive. Unfortunately for him, his life isn’t a BeeGee’s song as the

bricked on the river to give Wright the “W”.

Hellmuth had to settle for second place for $20,000 while Wright claimed the title and $50,000 in prize money. With that, Wright got a little revenge on Hellmuth (though the PAD episode actually filmed before High Stakes Duel, so technically it was Hellmuth who would go on to exact revenge).

“Nick played really well, honestly, from start to finish,” Hellmuth said after the match. “Classy guy on top of it and I enjoyed the match. I just get tilted. I’m emotional right now, I’m seething because I lost.”

Hellmuth then shook hands with Wright to put an end to “Fight Night” on Poker After Dark.